With all the time available to me recently, I’ve been drawing non stop. I’ve settled on drawing animals because there are an infinite number of subjects to draw from, and i figure the plague will be over before i run out of options.

One of the animals I chose to portray was the bluejay. It’s a local bird, with a rather harsh cry, but it is beautiful and made for an excellent series of studies. I did the preliminary pencil drawing and then inked it up using a Sakura Pigma Micron in size 01. I use this pen for animal drawings because it has the word ‘pig’ hidden in it:

I knew I wanted to add blue to it, but i wanted to explore my options before committing, so i did the following exploratory versions in a very loose manner, just to test some techniques out:

The watercolour and coloured pencil study started out with speckles of watercolour that i used a toothbrush to apply, but the speckles were one dimensional and not very interesting. I came back to it later and added the coloured pencil for fun and I ended up finding a nice cross hatching effect that I plan to use for other projects. You can see the watercolour speckles around the outside of the bird:

The acrylic ink version showed more promise, and i plan to explore that in more detail later, but it lent itself to a looser overall feel and I needed something that wouldn’t bleed into the actual pen drawing. Sure i could have masked it, but masks are for villains:

Finally, i thought i would explore my old college favourites, Chartpak® AD markers. I don’t use them much anymore because they contain xylene and i think i was accidentally getting high using them. But for a quick study i threw caution to the wind and had a go:

The Charkpaks absorb beautifully into the paper thanks to the xylene. You can’t really tell here because i only did a single layer of blue with some textural lines using a blender marker, but they blend in spectacular ways. I don’t believe they are lightfast unfortunately, so they aren’t really an archival option for fine art.

So after all that, i decided to play it safe and continue with what i’ve been doing with all the animal drawings i’ve been doing lately and just add some blue Prismacolour coloured pencil around the ink drawing. I love uniformity, despite what my closest associates may tell you, and keeping things the same, especially within a series, just seemed to make sense.

Thanks for reading, more to come. 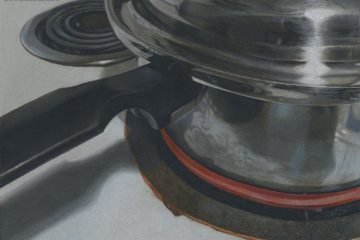 A drawing of a pot on a stove. Coloured pencil on paper. 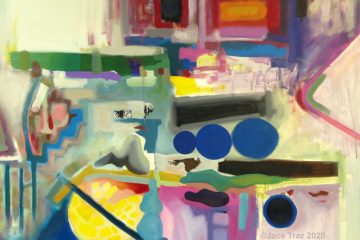 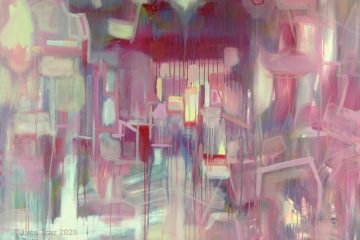 Abstract city-scape in pinks and greys. Acrylic on canvas.